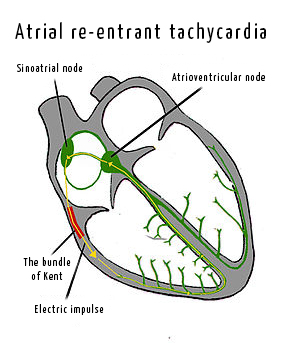 Some patients may not have clinical manifestations. The main manifestation of the Wolff-Parkinson-White syndrome is arrhythmia. In more than 50% of cases paroxysmal tachyarrhythmias occur: atrioventricular re-entrant tachycardia, atrial fibrillation, atrial flutter. Quite often, the syndrome occurs with heart disease: abnormality of Ebstein, hypertrophic cardiomyopathy, prolapse of the mitral valve.

There are several ways to treat the WPW syndrome:

WPW syndrome can be detected at any age, even in newborns. Any concomitant heart disease, which proceeds with disorder of AV-conduction, can contribute to its manifestation. The persistent of the WPW syndrome, especially with arrhythmia attacks, disrupts intracardiac hemodynamics, which leads to a distension of the heart chambers and a decrease in the contractility of the myocardium. The course of the disease depends on the presence, frequency and duration of tachyarrhythmia. Sudden coronary death in WPW syndrome occurs in 4% of cases, usually due to fatal arrhythmias (atrial fibrillation, atrial flutter, ventricular tachycardia, ventricular fibrillation).