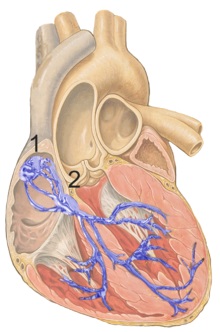 Cardiac pacemaker is the part of the heart muscle, in which impulses are generated that determine the heart rate.

Schematic picture of the conduction system of the heart (highlighted in blue): (1) sinus node, (2) atrioventricular node

In humans, the main cardiac pacemacer is the sinus node. It is a special site on the arch of the right atrium, located at the site of the confluence of the inferior vena cava. The node consists of a small number of cardiac muscle fibers innervated by neuronal endings from the autonomic nervous system. In the node, each wave of excitation that leads to a contraction of the heart muscle and serves as a stimulus for the emergence of the next wave arises. The conduction system of the heart provides rhythmic work of the cardiac muscle, synchronizing atrial and ventricular contractions.

In pathological conditions, the role of the pacemaker can be performed by other areas of the heart. Some specialized heart cells generate impulses spontaneously, that is, without any external influences, since they are in an autooscillatory mode. The sinus node suppresses all lower sections of the conduction system by more frequent impulses, but if it is damaged, the atrioventricular node, which generates pulses with a frequency of 40-50 per minute, can become the cardiac pacemaker. In case of damage to this node, the fibers of the atrioventricular bundle (the bundle of His) can become the cardiac pacemaker, taking upon itself its function. The frequency of generated pulses and heartbeats will be about 30-40 per minute. If these pacemakers do not work, then Purkinje fibers can become the cardiac pacemaker, setting the heart rhythm about 20 beats per minute.